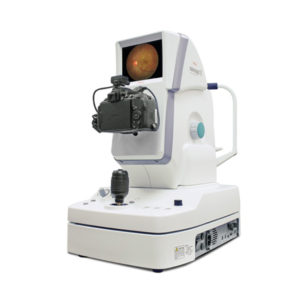 The Nonmyd 8s is a nonmydriatic fundus camera made by the renowned Japanese manufacturer KOWA.

The camera works on the principle of indirect opthalmoscopy, where a source of primarily white light is built into the device. The optical system focuses the light into the patient’s eye where it then reflects off the retina and returns to the lens of the fundus camera. The camera then modifies it again using another optical system and it is finally recorded and digitised using a CCD chip with a 24 Mpix resolution and stored in the computer.

The camera’s imaging range is 45°, but the software is able to create a panoramic image displaying the optic fundus at an extent of more than 100°.

The Nonmyd 8s is a nonmydriatic camera which enables the retina to be photographed without the need for the use of any mydriatics (without the need for any eye drops). It has excellent optics supplied by Nikon (D5300) and enables simple and precise focussing with the application of the minimum amount of light.